On Michael Klein's "then, we were still living" 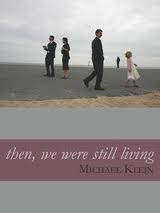 In his new post-9/11 book of poems then, we were still living, Michael Klein creates the most involving mis-en-scene I’ve seen in a long time. Rich with various intellectual inquiries, the book could arguably be seen as a commentary on the potentialities and limitations of the mediums of film and poetry.

How does one ethically portray unmistakable tragedies and their aftermaths? In fact, you could claim that the poems’ deliberately blurry focus, their poetic abstractions, reject the rigidly staged domestic narrative with its concrete particulars.

It should be no surprise that I find Klein’s obsession with light as playing on the same field Stanley Kubrick did in Barry Lyndon. The film—my favorite Kubrick--is known for the director’s choice to use only natural lighting. In an early poem, "The playwright," dedicated to Mara Irene Forbes, Klein writes: “She was talking about the mystery happening to/the artist as necessary light.” Light as poetic process, as an unforced ars poetica. You might even call “Day and Paper,” dedicated to Jean Valentine, a complimentary theory of art. According to this poem, Klein's philosophy was engendered at an artist’s colony in Vermont. As Klein demands: “take that excruciating/collapse of light over day/over paper/and use it/when it feels most useless.”

The book’s closure ends with two poems, both revolving around light. In the final poem, Klein offers what a brilliant poem should: an opening for more. I don’t think too many poets have the courage to offer as much white space, a welcoming of light.

The poem “More light” features the protagonist (oh! How I want to say Michael Klein himself!) engaged in remodeling the kitchen. The banality of the act encourages the narrator to feel ephemeral joy in domesticity. With self-satisfaction, lesser writers would end the poem there—not Klein.

...indiscriminate joy finds us
and enters us

how it however briefly
releases our whole pasts
as a swimmer...

mild astonishment
around the eyes
ready to take the dark

as breath, as if to say
he'd seen the other world
less terrifying and with more light than this one.

The line break between “dark” and “as breath” conjures up several unexpected meanings. The narrator’s generous decision to extend the simile of the swimmer in such a way allows him to transform him into a heroic entity (“ready to take the dark”)—almost like a modest superhero. At the same time, the dark itself morphs into breath, refusing the dark/light dichotomy. This breakdown offers plenitude: breath, “the other world” as well as the maintenance of this one, and yes, even “more light.”

Light figures into a good number of poems in other ways, even unexpected ones. In the fun poem “Five Places for Sex,” which is written with a disproportionate number of end-stopped lines, making the poem look like a crude movie script, emphasizing the action—alas, even this formal strategy does not limit Klein’s gentle, perhaps understandably sentimental, philosophizing:

and death as it pertains to sex

the same time every night.

Almost shocking, they are

if it weren’t for them lighting up the dark boulevard.

The awkwardness of sex (and words) can render figurative language troubled at best, even if enjoyable, providing something like light. Like grace—something that Klein’s book offers in serious quantity.

Michael Klein's then, we were still living is available through GenPop books. 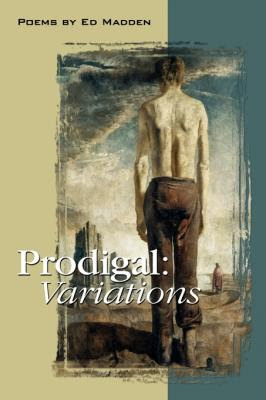 Poet Charles Jensen has always impressed me with the way in which his own work invests in different sorts of beauty. If you should read his work in magazines or his debut, First Risk, you can’t help but feel an aesthetic restlessness that serves him well: from narrative to lyric; domestic to meta-fictional; or even drawing upon Stein to destabilize the definitions of commonplace words.

It’s no surprise that we should be excited with what he will bring to Lethe Press as their new poetry editor. Lethe Press’ book designs are always stunning, their content always charged and necessary. I can't think of an author who wouldn't be happy with their product.

I love that Jensen chose, as a first book under his tenure, one that is completely different than his own style(s) and content. For me, this is always the true mark of a superior editor, and one Jensen should be commended for. I think he’s doing a great job already.

It is a very respectable, polished collection with more than reasonable aims: trusting incredible line breaks and wonderful sound to re-energize commonplace tropes of a gay man’s attachment to an abusive father, the rural life, and the Bible with, of course, a tortured ambivalence. It upsets me that it will receive much less attention than Michael Walsh’s weirdly anorexic The Dirt Riddles, which deals with many similar themes. Will Walsh's book stay more in the public eye than Madden's because it is distributed by a university press over a smaller, predominantly gay one?

You can feel the steadfast sincerity that Madden brings to his poems. It’s a hard thing to fake. At the same time, his words never fall into the pitfall of sounding merely earnest. Here’s a fairly emblematic selection of openings. From “Rock collection”:

His uncle taught him how to find them—
after light rain, best time to walk

the rows, find the flaked flint
in dark dirt, cream or pink stone,

a scrape or point in the wet furrow....

From “The secret gospel”:

The sound of rolling stone pushed back the darkness:
a grinding, as of grain and grit inside a mill.
The room filled with light; a man
stretched his hand toward another,
causing him to stand, the shroud unwinding.

I sing old hymns while you drive.
Neither of us believes them anymore.

What do you make from a piece
of driftwood found at dry lake?

The wind whistles through bare limbs,
a song of renunciations.


There’s nothing wrong with these lines. A lot of the poems in Prodigal appeared in great national magazines, as they should have. Madden is setting himself up to be a master stylist, which he succeeds in doing. He pushes the material as far as it can go in terms of craft. There's no denying the enviable style, a content of its own. Here is the end of “Rock collection”:

He left a cigar box of rocks in the closest—
arrowheads, fossils, an agate he’d found

in a mound of wet gravel, before
it was dozered into the dirt road,

glitter driven in the ruts, the ditches
lined that spring with bundles of pink phlox.

The passage is amazing--the fun of the word "dozered," for instance. Without any qualifications, Madden has an excellent ear for the combination of sounds and letters. I happen to own Ed Madden’s debut, Signals, and there seems to deliberately be nothing here, in terms of content, as tricky as “Roots: An Essay on Race” or fun set pieces like "The Mutter Museum." This smaller scope allows Madden to focus on sound, and this decision is a bold choice. It seems that with this book, he’s trying to master his rhetorical skills, struggling and succeeding with music, through material as rich as the soil he describes with careful, repetitive precision.

Meticulous yet never fastidious, Madden's second book of poems Prodigal: Variations takes the familiar trope of rural gay son-father relationship and turns it into something we can't live without. Madden writes: "The crow is a bruise/on the green hedge, it shines." That's how I felt about this book: painful, illuminating, necessary spectacle.

Ed Madden's Prodigal: Variations is available through Lethe Press.
Posted by Steve Fellner at 11:38 AM 2 comments: