In a creepy faux analysis of Anne Sexton, Jameson Fitzpatrick's article entitled "Anne Sexton, Aesthetics, and the Economy of Beauty" deflects larger issues of race and power in the gay male community in favor of decontextualizing the published words of poet, Eduardo C. Corral, for more questionable ends.  I hope that the Lambda Literary review offers a corrective to an article that could be seen as a (clumsy) racialized attack against Corral.

It must be noted that you feel Fitzpatrick's eager desire to ditch talking about Anne Sexton, his "favorite" poet, and discuss about what he sees as larger issues (ie Eduardo C. Corral).  In fact, the entire article acts as a vehicle to express his self-confessed fear that the poetry world may be ruined by talking about appearance and by extension whiteness.   He uses the typical codified language to make the issue of race completely present and invisible at the same time: "beauty," "style," "substance," among other things.  Whether or not Fitzpatrick believes Corral's book Slow Lightning is "bold and imaginative" (which he tellingly puts in parenthesis) is insignificant.  But it is amusing that he conflates Sexton with Dimitrov: "...her gift as a writer remains singular and irrefutable.  Likewise, Dimitrov (his attractiveness aside), writes tight, honest poems...Dimitrov is writing some of the most exciting poems today."  It's comforting to know that "poetry's next great gay hope" (as stated by Out magazine) is already canonized without even having published a book.  But a poet, the first Latino who has won the Yale Younger Poet Prize, according to Fitzpatrick, is doing an admirable job, which receives a quick gloss.

What's predictable is that the way the article is structured.  Fitzpatrick's closing argument is that Dimitrov's poems are "some of the most exciting poetry today."  And we also have to receive this final imperative: "That he is young and pretty shouldn't count against him."

Who is attacking Dimitrov's beauty?  Who even named Dimitrov in print?  Certainly it wasn't Corral: there's no mention specifically of Dimitrov in the interview that launched this attack.

Although never explicitly named, Corral may be talking about more than "weight" (as he does name in the Ploughshares interview) and "cool"-ness.   He's referring to the whiteness of the poetry scene.  He has mentioned in a variety of interviews about the marginalization of Latino poets in the white publishing world.  There's no way Fitzpatrick could not have seen that--he admits to having read the numerous articles about Dimitrov.  He no doubtedly may have scanned a few of Corral's unless he was too taken by Dimitrov's beauty.  Is there really any other way to translate Fitzpatrick's "bristling" at Corral's "experience of his exclusion" as a dismissal of the subject of race?

By pulling Corral's quotation, as Fitzpatrick does, especially decontextualizing it from other interviews and articles (he lists Dimitrov's entire CV),  he makes it seem like Corral's a self-hating Latino who wishes he was as good looking as the rest of the Wilde (white) boys.  I think that Corral's comment in the initial interview was much more nuanced in context and unaggressive--he doesn't name names.  At the same time, it isn't self-pitying.  There's a delicate balance there.

I think the issue of who is naming (Fitzpatrick) and who isn't (Corral) reveals the racial inequalities as well.  No matter how successful a Latino is, he always feels the pressure to be polite, be unaggressive, to not name as a result of power structures and individualized racial presumptions.  But the unknown white guy can swoop in and say whatever he wants and gain credibility and access to the conversation without any self-consciousness, all in the desire to claim truth and beauty.

I am not in any way claiming that Fitzpatrick is racist.  I don't know him.  I don't know Dimitrov.  I don't know Corral.  I've never met them in person.  The point is this: what may be a complete lack of self-interrogation on Fitzpatrick's part is reflective of the failure of white men to discuss the matrices of race and the publishing world.

But this article also points to the troubling nature of the Lambda Literary organization: they make token gestures towards racial equality, but, in a lot of ways, affirm a glass ceiling for gay writers of color.  You can see it in the nominations this year.  They need to solve the problem.  One of those ways is to immediately create a symposium directly dealing with these urgent issues.
Posted by Steve Fellner at 12:15 PM 12 comments: 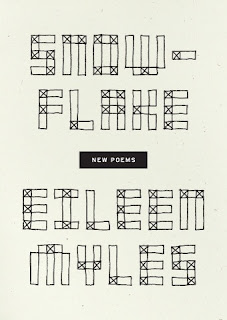 You can't help but be somewhat rattled by poet Eileen Myles' audacity to write such short lines --often consisting of just two or three words-- in a column that scrolls down page after page, and sometimes, even another page after that.  Why not combine a few more words on the same line and make the poem a bit shorter?  It'll save space and trees.  Her refusal to be economical is obnoxious.  And in a gendered sense, almost completely necessary.  She's so admirably greedy when it comes to taking up space.  The length of her poems show that to us; they push against the daintiness of the singular lines.  It's unforgivable excess, indispensable lesbian melodrama.  Thank you, Eileen.

I'm always exasperated when I read a new book by Myles, one of the three greatest living poets.   Her new dual volume Snowflake/different streets reminds me that great art should make you feel suspicious; like you feel they're getting one past you.  It's not just the fact that Myles can seem like she's cheating with her palpable absence of words.  (What's her advice to her students?  If you write three words a day, you'll have a full-length book in two months.)  What's equally bothersome is the words themselves: they're a lot of the time monosyllabic.

Perhaps we should see Myles' ars poeticas as confessions. Here's a wonderfully rude poem called "#11 The Lines" in its entirety:

We're both here
in the dark and I can't
feel you

I don't know what
you're saying

just stay in your
lines

I'm surprised that Myles didn't divy up the final line into two: "li-" followed by "nes."  Or maybe I'm not surprised.  She's not that nice.  She's not aiming for gravitas.  She's not simply being cranky.  She's not above getting bored with us.  Myles and her readers might both be "here," "in" the poem, but by the end, she's nothing more than a nasty imperative, and we're left holding her words, those burdensome lines.  She's aware of how much they weigh.  She can't/won't carry them any further; that's why she drops them; the lines lie there, flat and attenuated; that's why she seems to takes off and doesn't look back.

The narrowness of her work in these two volumes is something that challenges the conventions of autobiographical poetry.  She doesn't make the mundane beautiful; she makes the mundane even more mundane--that's where so much of the excitement lies.  She's going to share no matter what, even if it's her boredom with herself.  In the poem, "My Monster" she begins with a fun observation that feels simply made to push her toward writing:

dry cleaners
never
have to
worry
about their
sign 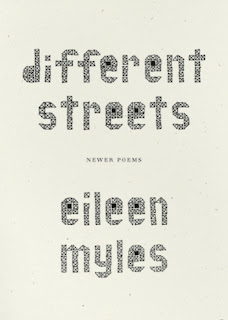 Myles is too amazing of a poet to even attempt to ride on her own wittiness--she knows that  when you say something so cool, there's no other thing to really do except be tired.  Why continue trying to outdo yourself?  How many smart things can someone say in a day?  Or a month?  Or even a whole goddamned year?  Who can keep things going, and who wants to?   Myles makes the inevitability of intellectual fatigue cool.

The poem happily descends into this sort of peculiarity:

I want
to be
in it

And look at this great opening from the poem  "Transportation':

I bought a bigger
pinker dick
for you
but then I
didn't
call.  It seemed necessary
you're tall
& I miss you all
the time.

As if the sight gag of the "bigger" --Myles is the queen of the mock qualifiers-- isn't enough, the line breaks amp up the comedy even more.  Within thirteen words, six and almost one half lines, she gives a gift to her beloved, takes it back, and ditches her completely.  That isn't even the best part of it.

Here's the rub: the placement of "you're tall" in a line all by itself.  It's something that is implicit in the preceding lines---another useless qualification, but the sudden need to state feels dumb and by extension loving.  Myles might disappear from the relationship, but she still sees her.  Myles can't help herself: the jarring line breaks express a double take of sorts, and isn't that what we all want from our lovers?  As well as our poems?  To make us belief that something of our essence, no matter how insignificant, can still catch someone off guard, even when the whole stupid thing is over?

If you look at this amazing dual collection as more or less a series of ars poeticas strung together with funny anecdotes about girlfriends, and places, and miscellaneous wit,  it all begins to make even more sense.  As she says in the poem "your name," "Aren't/we lucky to have/captured each/other in this/hideous neon light."  It should be obvious that she doesn't phrase it as a question.  She doesn't even need to hear our yes.

You can receive information about  Eileen Myles' Snowflake/different streets at Wave Books.