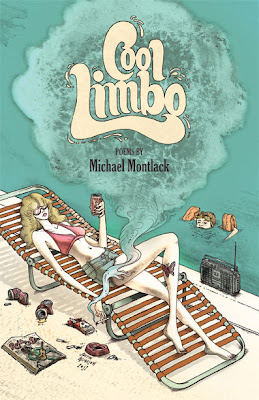 You’ve got to applaud a gay man who dares to sport a retro cover on his first book of poems. He’s willing to give away his age. Once you acknowledge the past, in a campy way or not, you run the risk of fumbling towards a dim nostalgia. Michael Montlack’s first book of poems, Cool Limbo, avoids that fate, revealing a giddy sophistication. His book is laid-back and silly; its best moments, of which there are more than a few, is showboat-y... and with good reason.

The issue of age comes up more than once in Montlack's poems, disclosing a preoccupied self-awareness. Take the poem "A Golden Girls Prayer." It begins:


The best lines include specific allusions to the TV show. How can you resist this couplet? He writes: “so that[in old age] I might.../just once say, 'I'll be out on the lanai.'"

Not only does he inquire into old age, but Montlack also fiendishly investigates our childhood toys. He has a lot of fun in the poem "If Hello Kitty Had a Mouth":

Or maybe she’d still be mute after all.
Perhaps give us the silent treatment
out of sheer spite.

She could become a feline AIDS activist.

What’s great about a bunch of Montlack’s poems is that they are largely a series of unapologetic over-the-top comic riffs, jokes. He thankfully doesn’t balk at his own pettiness. Once in awhile he seems to lack the confidence in his conceits and turns to unnecessary pathos for closure. This “Hello Kitty” poem should accept itself as joke, exactly what the title promises. I wish he didn’t feel the need to humanize her situation. Why anthropomorphize at the end in order to give the poem a false gravitas? He writes:

And sure, she might secretly want them
to beg her not to leave.
But she’ll know she’s done right
when they so cheerfully say nothing,
nothing at all.

There’s a plethora of punchlines in the book that makes that minor flaw essentially disappear: “...the best beauty is mute” (“Peter Berlin”); “Will you/be the mosquito netting/draping my honeymoon bed...” (“The Slip”); “So take a course in Arts & Crafts,/buy a glue gun or sewing machine./The support staff has been promoted!/Your court gesture is now the Queen.” (“’Uh, didn’t you get the memo?’”); “My tough leather headbanger well hid the lace/only I glimpsed as she kept my straight face.” (“Running with the She-Wolf.”)

Like any good comic, you can feel Montlack's impatience, his restlessness to move onto the next gag. What makes the collection impressive is his panic to keep us laughing is wholly unnecessary, yet makes him and us fully energized.