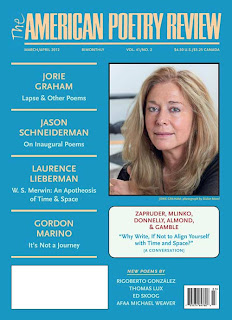 The eerie thing about Rigoberto Gonzalez's poem "Our Deportees" in the current March/April issue of The American Poetry Review is the names of particular immigrants are almost never invoked.  There's one brief stanza about a common burial that lists some in the most cursory manner.  But that's it.  This is a poem that boldly refuses to use narrative in the conventional sense; we aren't given particular plights of particular victims.  The United States' treatment of illegal immigrants needs more attention than a litany of faceless entities, according to Gonzalez's poem.  By surveying the entire world --from a single apple tree to the path of a red-tailed hawk to strange flowers "with no petals" --he effectively illustrates how the entire fabric of the world is harmed through the persecution of immigrants.  Through Gonzalez's trademark of jam-packing stanzas with a particular figurative device--in this case, most often personification--he succeeds in creating what may be the best poem I've read in the last couple months.  Let's hope it doesn't get overlooked when the inclusions for Best American Poetry and Pushcart Prize volumes are finalized.  Along with Jee Leong Koh, he was already robbed of a Lambda nomination.

Gonzalez's six-sectioned poem deals explicitly with the bleak trajectory of the illegal immigrants.  Each section receives a name: "after the immigration raid," "after the ride by bus," "after the detention in the county jail," "after the deportation plane falls from the sky," "after the clean-up along Los Gatos Canyon," "after the communal burial."

The poem introduces itself on the smallest scale: "Beneath one apple tree the fruit/lies flung like the beads from/a rosary with the broken string" By the end of the poem, that "one" transforms itself into something immeasurable.  At the same time, the poem quietly enacts its own comprehensiveness: "Twenty-eight equals one/deportation bus equals one/cell in the detention center, one/plane-load of deportees, one/plunge into the canyon..."

Not to mention that "one," throughout the course of the poem, extends itself beyond the human, and beyond the natural, and into the inanimate,  into the lives of our objects.. With all the personification, you'd expect the poem to begin to sound like a Disney World theme park, but it's goal is to convey how this horror affects every fiber of spiritual being and mortal creation.  Everything is corrupted, even the bus that transports the immigrants.  As Gonzalez writes, "The bus makes believe/no one cried into their hands and smeared/that grief into its walls."  And then later: "The bus breathes out the shapes/turned silhouettes turned scent/of salt and sweat."

Perhaps the most expert use of personification occurs in the section "after the deportation plane falls from the sky."  I thought of James L. Dickey's pre-9/11 poem "Falling" from the 70s that dealt with a different sort of airline tragedy.  The latter deals with a non-fictional account of stewardess who fell to her death after being sucked out of the airplane's door.  The poem scrawls all over the page with long, exhaustive lines, which includes one like this: "screaming without enough air/still neat  lipsticked  stockinged  girdled by regulation/her hat still on...in all her dance-dark weight/coming down from a marvelous leap..."  Here Gonzalez describes the act through negation: "A red-tailed hawk breaks through/the smoke and doesn't drop the way/the bodies did when the plane/began to dive and spat pieces of its/cargo out the door."   Gonzalez offer an antithesis to Dickey's crazy romanticism of death.  As he writes, "No grace, the twitching/of such a great machine.  No beauty to/its blackening inside the pristine/canvas of majestic blue--a streak of rage/made with a torch and not a paintbrush."  Those lines serve as an ars poetica--Gonzalez is uninterested in a false romantic nature of the tragedy.

In the final stanza of the poem,  within the section entitled "after the communal burial," he uses an exclamatory didacticism: "This is the place to forget/about labor and hardship and pain./No house left to build,no kitchen/to clean, no chair on a  porch, no/children to feed."  This sort of move makes a poem like "Our Deportees" truly risky--a work that is too often used.  Here though it's completely earned.  With the nation's failure in dealing with the role of immigrants, didacticism is needed.  Without apology, Gonzalez informs us that there is, indeed:

...No longing left
except a wish that will never come
true: Paint us back into the blank
sky's blue.  Don't forget us
like we've forgotten all of you.

Information about the March/April 2012 edition of The American Poetry Review can be found at https://www.aprweb.org/
Posted by Steve Fellner at 9:17 PM 2 comments: