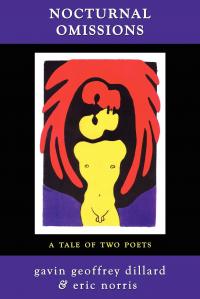 The book begins with the poem "La Fin de Temps" in which Dillard boldly declares his intentions: "I want to supplant your blood with my sperm and/plant a garden of teeth upon island and crest."  The next page features a response poem by Norris called "The Day of the Apocalypse."  Here's a sample: "I creep forward like the Earl of Gloucester in King Lear, smelling my way to Dover.".  And then Galvin's reply appears as the next poem "Petit Dejeuner au Lit."  One of the lines asks "...will a hot stream of piss be mine and a fleshy scone of rubicund jam?"

Nocturnal Omissions might be one of the more intriguing books of 2011.  Not quite camp, not quite comedy, it feels (sort of) like an extended in-joke-- except one that you do weirdly want to part of. Sometimes the experience is like watching a really amazing high-school variety show; it's sloppy, and you spend a lot of time simply admiring their gusto, waitng for them to stumble into the next fun bit. Sometimes it can take a bit too long to come, but you know it will.  This book is even as overlong as most of those shows-- as it should be-- part of the fun is their refusal, conscious or not, to conform through compression.  They feel entitled to their space and their excess, the thought of acquiescing to someone else's rules doesn't even seem to occur to them.  It's 165 pages, and you get the sense they wouldn't mind if you didn't go straight from beginning to end.  Go ahead and wander around.  Do what you want.

The pronouncements of love and lust ("But you, precious halfling, when you grin and dance before me, even the possums mumble how tasty you might be in a pie or stew") makes the humor endearing in an uncommon way.  You get the sense they're writing parody, or self-parody, or something reminiscent of an idea of parody, but you're not quite sure.  The call-and-response poems document the minutiae of gay life ("I wore a wife-beater out in public today, for the first time in some years--the diet has worked"), possibly sincere philosophy ("Love is a misnomer, for it implies duality, purports two disparate parts intertwined"), and critiques of well-known contemporary poets ("I do like dogs.  I detest Mark Doty.")..along with other things ("This week I had implanted my first bionic tooth--a titanium screw into my lower mandible; I have felt no pain...).

When you read lines like "Don't think me cynical if I find love incredible," you can't help but read this as a warning to the critic.  in fact, the book transforms itself into something critic-proof.  When they reference Sappho, Housman ("the best"), and Shakespeare, you don't feel the allusion are a nod to the audience, an insistence for approval, like the kind of poem the University of Chicago press goes ga-ga for.  It's thrown into the poem because they felt like throwing it in; they like books because they do, not because they should.

As Bryan Borland's still new Sibling Rivalry Press (already highly regarded) continues to take off, you can't help but hope he doesn't begin to only publish more mainstream authors, like the precocious Saeed Jones and the established Matthew Hittinger, but also takes in what ultimately be the more unexpected projects from people who don't seem to have MFAs or the most embarrassing sort of Ph.D. (yes, you can still purchase one in creative writing if your multiple-choice skills are intact.)  Flawed and wholly undisciplined as it may be, perhaps an integral part of its strength, the unstoppable joy of writing surfaces in Noctural Omissions, which is perhaps the most radical act of all.

Gavin Dillard's and Eric Norris' Nocturnal Omissions: A Tale of Two Poets is available through Sibling Rivalry Press.
Posted by Steve Fellner at 11:12 AM 3 comments: 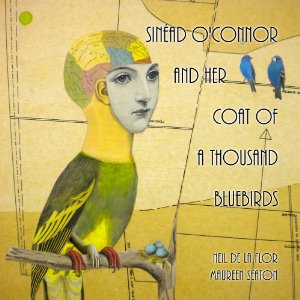 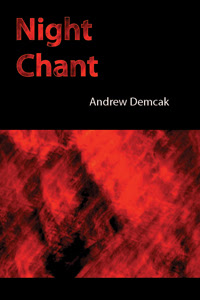 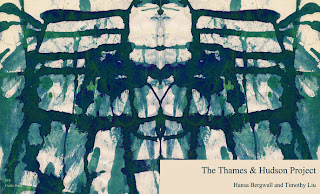 Hansa Bergwall and Timothy Liu's The Thames & Hudson Project is available through Fields Press.
Posted by Steve Fellner at 9:07 PM No comments: 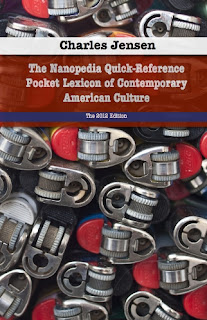 Almost feeling like a game of Tetris, there’s a lot of fun in watching Charles Jensen shift and slide the sounds and meanings of words in his new chapbook, The Nanopedia Quick-Reference Pocket Lexicon of Contemporary American Culture. With suaveness, Jensen manages to create puzzles through prose poems that wind up feeling as solved as an aphorism and as open-ended as a sweet riddle.
One of his best, “Reaganomics,” begins: “The color-coding trends toward the blue collar.” It ends with bleak comedy: “Dollars trade hands. Those young boys take one for America. It’s a chaos theory: a butterfly flaps its wings in Beijing; a moving car blowjob goes suddenly, horribly wrong.” Indebted to Stephen Dunn’s Riffs & Reciprocities: Prose Pairs and James Richardson’s Vectors: Aphorisms & Ten Second Essays, Jensen refuses those authors’ flat diction which always verge on sounding like a USA Today article.
Here’s where “Frenemies” begins: “Tragedy makes the shape of an O with his mouth and sooner or later, you know some teenage boy thinks, Round peg, round hole. Here’s where the same poem ends up: “...everybody loves a loose Tragedy, but comedy doesn’t get near enough play. The difference between Hamlet and Hambone.” Serio-comic, Jensen’s chapbook reveal a great aptitude for the making of worthy prose poetic games.
Charles Jensen's The Nanopedia Quick-Reference Pocket Lexicon of Contemporary American Culture through MiPOesias.
Posted by Steve Fellner at 7:37 PM 2 comments: