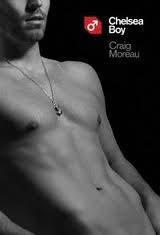 Craig Moreau’s new book of poetry Chelsea Boy feels as if it's nostalgic for someone else’s nostalgia. Moreau knows that he isn’t part of the heyday of wild sex and drugs which once embodied Chelsea. This distance doesn’t stop his overdetermination to see himself as a descendant of a missing subculture. It creates a weird disconnect in a book that wants to see itself as edgy and contemporary.

For a pretty much straight-up first person party boy memoir, the most surprising aspect about Chelsea Boy is that it is so sexless, almost virginal. This may be the most disappointing difference between the past and present iconic Chelsea Boy figure. With AIDS, Chelsea Boy has become frigid. In his prose introduction, Moreau writes that there were two guiding questions for him in his writing: “What is a Chelsea boy to you? And, do you consider yourself a Chelsea Boy?” Having read Chelsea Boy, my greatest fear is realized: it means a lot of preening, a lot of talk and not much action.

What’s the point of being beautiful if you’re not going to offer a piece of yourself to everyone who wants? Or conversely, what's the point of coveting a Chelsea Boy if he's not going to spit in your face? That’s the central problem with what Moreau admirably labels as autobiography: he’s a nice, resepectable guy. He’s pretty careful in his dealings with other men and not very mean. I always cringe when you ask someone what his worst flaw is, and he says, “I’m too giving.”

But Moreau is too generous. He doesn’t have enough fun with unabashed narcissism. Instead of giving us vain, indulgent narratives about sex and drugs –two impossible, thankless things to be writing about—he creates a series of poems entitled “Chelsea Boy Survival Guide” which contributes to the structure of the books. He's so sweet he makes the time to pose questions of etiquette. He lets the music rest.

Here’s a look from “Lesson #2: How to Build a Puzzle for a Broken Heart”:

Go to K-Mart and look
for however many pieces
will fix your broken heart.
(I recommend 1000+, ages 15
and up, preferably with a
Thomas Kincaid painting.)

Purchase a 40-ounce beer,
one with a name you don’t want
to remember, written in bold
lettering and sounds vaguely
Latin American.

This passage is emblematic of the writing in Chelsea Boy. At best, it's inoffensive and serviceable. The modest wit hides potentially intriguing subject matter, namely, a more explicit dialogue between the past and present Chelsea Boy figure in gay culture. It’s odd that the lore involving the Chelsea Boy needs to be transformed for Moreau into self-help. At points, Moreau feels as if he transforms into a queer Tony Robbins. This move toward self-help feels as dated as the origin of the Chelsea Boy figure itself.

His contrived literary allusions perhaps are a result of his anxiety about his subject matter. Rather than reenergizing the sex-and-drugs tropes, he feels compelled to give pedestrian tributes to literary giants. Here's a stanza from "O, Whitman":

I love you for being civil war peacemaker, above so many
boys at their last hour, not for your love of their sculpture
or even their spirit, but for their being—-leaves of grass
burnt by fire, and how I wish to lay aside you, both
as ash and apple.


When he does write about sex, as in the poem Rawhide 54, he uses obvious metaphor:

The water dish outside
is only for dogs--and thank gods
you're here. Where else
would I go to get a drink
when I'm not wanting to drink
cranberries, but still needing to take
my collar off and feel bitter
on my tongue...

In spite of its sincere intentions, Chelsea Boy ends up committing a fatal error: it gives sluts a bad name.