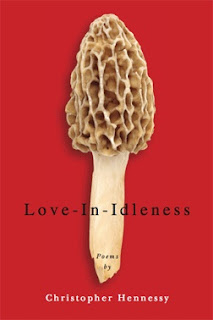 Cautious, sometimes overly so, Christopher Hennessy's Love-In-Idleness seems influenced more by the fixed knowingness of Alfred Corn's poems than the loony spontaneity of Wayne Koestenbaum, even if he does seem more invested in the latter.  Referencing everything from Nietzche to Linnaeus, from Icarus to Gethsemane, it doesn't take long to realize that "Love-In-Idleness" employs a politics of academic elitism to push his book forward.  This isn't meant as a criticism; in fact, quite the opposite--it often grants the book an appealing old-fashionedness.  In a poem entitled "A Split Secret," posed as the story of St. Sebastian's lover, you can get the sense of Hennessy's finely crafted verse.  An archer hits St. Sebastian with an arrow, which causes his lover to remark on his beloved's physical body.  The lover pontificates if the martyr is beautiful "Even now?/Even branched/with arrows, skin bleached/but with a constellation/of red puncture ticks/Yet so little blood...And martyr is an ugly word--/a split secret, a coward's thumb.”  In another poem, “Ghost Boy,” also ostensibly sincere in its intentions (perhaps even autobiographical?) Hennessy writes to his father: “I’m left imagining a grim-faced child pressing the ghost/of his palms against the glass/a boy who sees the rumor/of his future in the black glass.”  Surely, if you talk to older gay poets, many would tell you that they felt compelled to embed their writing with classical and Biblical allusions.  Bias against gay material allowed, to an extent, for them to tell their own unique story as long as they affirmed that they weren’t going to ditch canonical touchstones in the process.  Now, with some civil-rights advancements, the compulsion seems to be a lot less overwhelming.  It’s pretty much a choice. And Hennessy proves he's able to use both the past and the contemporary to successful lyric effect.  Look at the firm, even if slightly too comfortable, ending from “Icarus on the Moon”: “...I’ll be seizing/ecstasy, a flying wild man—no one’s son./  No gravity.  Only libido, my breath causing/new eddies of atmosphere.  The moon-so close-/like all things desired, more or less there.”  Now admire the truly great final lines to the poem  “Blood in the Cum,” which takes the time to define its own title as “the scarlet ribbon/in an egg’s albumen, a mistake of embryonic petals/coiled at its center.”  Hennessy might occasionally approach his material in a tentative way, but his poetry reassures us that he has the ability to travel where he chooses next.
Christopher Hennessy's "Love-In-Idleness" is available at Brooklyn Arts Press.
*** 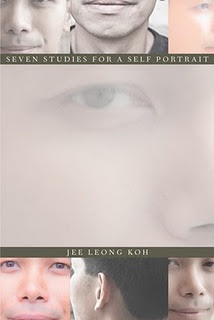 One of the most ambitious and overlooked book of this year is Jee Leong Koh’s Seven Studies for a Self Portrait.  Even though presumably autobiographical, don’t expect any mushy confessions here.   As good as anything I’ve read this year, Koh’s poems are curiously distant... but in an enticing and exciting way. The true excellence of the book is contained in a long poem called “A Lover’s Recourse,” a homage to Roland Barthes, stretching for forty-eight pages, written entirely in ghazals.  Tracing his relationships with lovers, the father, and his own writing process, Koh never resorts to easy theatrics but to open-ended imagery: “Love is not a house.  It is always on the move.  What does a lasso have in common with a house?”  And: “What is this world?/A ship or a shiptearing rock?/And does the lighthouse look anything like the sun?”   Like his peer Rigoberto Gonzalez, he regularly inserts a peculiar word to upset what may seem like a more ordinary image (although there is a more ferocious velocity in Gonzalez's poems.)  Here Koh does it with the word “itch”: “I hope perfection does not lie in quietness./A poet builds his house in the fading of a bell./The fading is a fault but silence is an itch./Most endurable, Jee, is the unrelenting bell.”  There’s a somberness that pervades the book that feels inherently risky; its confessions are checked with measured images and an eerie equanimity.  His obsessions are clear and multi-layered.  You don’t have to look much further than the trope of the pigeon, which moves consistently through the long poem and the book in general.  From “A Lover’s Recourse," the following lines appear: “He does not wish to choose between a dove and a dove./In Jee’s ribcage contracts the muscle of a pigeon."  In a shorter poem with a strategically overly familiar title “The Pigeon,” Koh reaches the graceful end : “This is not a rat ironed flat on the road.  This is/a pigeon.  See the white fluff still not completely blackened. Affixed to the ground, the animal ruffles the light./Hard to tell the difference but it is a pigeon./Hard to tell the difference but it is still bright.”  In yet another completely different poem, ”Unless,” Koh travels toward his obsession: “Every face is a closed door.  Every tree is a curtain./The smallheaded pigeon brings no message to me./The bright air gives way but doesn’t give entrance.”  Intriguingly unobtrusive and obsessive at the same time, Koh’s book grasps the sublime as any other book I've read lately.  I truly hope it’s found by more critics as the end-of-the-year retrospective lists are announced, and prizes awarded. This book deserves attention.
Jee Leong Koh's "Seven Studies for a Self Portrait" is available for purchase at Bench Press.
Posted by Steve Fellner at 4:03 PM 2 comments: