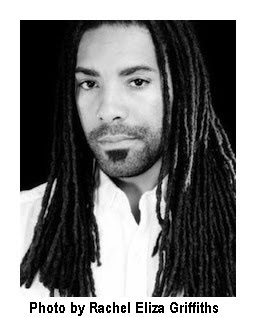 One of the wonderful things in writing on this blog only about gay writers is that I can delude myself into thinking that the poetry world is containable, manageable. It’s similar to working on an anthology: if your topic or formal issue is narrow enough, you can exhaust a group of writers you want to include. Exclusion can have its benefits. Because there are only so many gay poets with books, it gives me time to surf the web and read literary magazines, searching for poets who are still emerging, who I believe will grow to become even more exciting presences on the poetry scene.

Almost all of the poets I review on the blog I have never met. I don’t even know what a gay poet looks like. L. Lamar Wilson, who as far as I can tell doesn’t have a book yet, is someone I know only through his poems. And as time goes by, I have no doubt he will have in his own way a career as substantial as Eduardo C. Corral and Matthew Hittinger, two emerging poets who have recently had their books accepted by significant presses.

One of the poems that first brought Wilson to my attention was his poem “Dreamboys.” This poem first appeared in the literary magazine Rattle I was truly impressed at the way that he rewrote Theodore Roethke’s "My Papa’s Waltz" with an energy as compressed as Yusef Komunyakaa or Heather McHugh. In the first three tercets of the poem, he manages to reference both the Roethke poem and the musical Dreamgirls, adding an explicit queer matrix to the former through the latter.

The setup, as I read it: the narrator’ brother was apparently once conflicted toward him as a result of his gayness. Now that his own son is displaying queer mannerisms, he’s forced to do “penance” and provide a protection that he never afforded his brother. To further complicate this family dynamic, in this "waltz", both brothers, straight and gay, come to the painful realization that they are both limited in the ways they can parent this young queer child. Here’s the opening:

My nephew waltzes beside his father,
The man who was the boy who made Faggot!
A reason not to flinch. His neck a merry-

Go-round, our boy rears back, waves
His pointer in my face, jabs his other fist
Into his fist & wails: Watch yo’ mouth!

So much has been written about the thematics of Roethke’s poem: is it purely a sentimental image of a somewhat drunken father and son dancing or is the celebration a disguise for abuse and alcoholism? If you should choose to read Wilson’s poem as an answer to that debate, the poem straddles a similar ambiguity.

Here, though the opposite side of the continuum is not violence, but the knowingness of one’s ineffectuality. The nephew’s showboating causes the narrator’s brother to be transported into the past. As Wilson writes: “In my brother’s eyes, I see/The pain of remembering when I crooned Don’t/Tell me not to live. Just sit & putter. Life’s candy/& the sun’s a ball of butter” (i.e., lines from the showtune "Don't Rain on My Parade" made famous by Streisand and, to a new generation, Glee's Lea Michele). At the same time, the narrator and his brother “applaud” yet at the same time “feign” laughter at the nephew’s queer antics.

The young gay child is also given more agency in this rewriting of the Roethke’s poem as as he sees “beyond the veil shrouding/His father’s eyes. Realizes this isn’t/How brown boys win favor.”

The young queer child is given the scruples to see through the romanticism and into the unfortunate realities of race and sexuality. What is especially rewarding in this poem is that the gay narrator admits his own helplessness in the matter—he’s as lost as helping his brother’s son as his brother was with him. The nephew “Searches/My eyes for answers.

In this time when nearly every gay male couple seems to be thinking about adoption, there’s an understandable refusal to address gay male frustration at our sometimes ineffectuality in being able to protect or reach a younger generation of gay men from the very hurts we once experienced. Through the bleak closure of this poem, Wilson begins to address it. You don’t need to go much further than the poetry spotlight on the Lambda Literary website to see other examples of such exciting complexities from L. Lamar Wilson that will build an undeniably great first book.
Posted by Steve Fellner at 4:21 PM No comments: