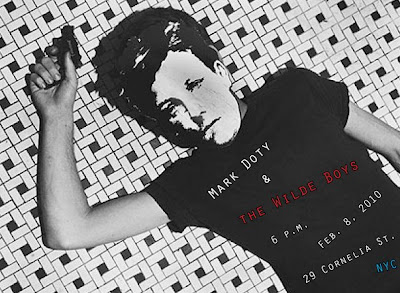 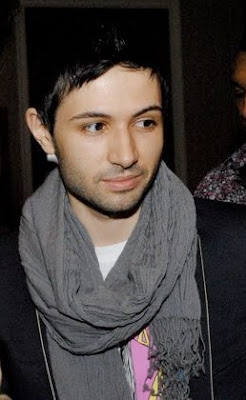 On the eve of the 8th Wilde Boys queer poetry salon, I asked founder Alex Dimitrov some questions.

Q: I heard about your queer poetry salon, the Wilde Boys. In fact you are quoted as saying that it’s for “beautiful boys who write and appreciate beautiful poems." Could you go into more detail about the salon? When it meets? Who’s invited? And why I wasn’t offered a personal invitation to attend. I’m a fucking heartthrob. When I sashay through my Upstate New York Walmart, everyone-and I mean everyone- does a double take.

A: Come sashay through the gentrified streets of downtown Manhattan with us—we’re Wilde, I promise. I know everyone thinks Manhattan is so over, and that a downtown art scene can’t thrive here like it did before, but that doesn’t seem true to me when it comes to contemporary poetry. I started Wilde Boys because there were so many intriguing and talented young gay poets who I would see at readings, or read in journals, but never had the chance to really talk to. Although we were all getting our MFAs in the same city, we weren’t getting together and talking about poetry and life, as we should have. You know the opening lines of Frank O’Hara’s poem “Song”? “I am stuck in traffic in a taxicab/ which is typical/ and not just of modern life.” Well, during graduate school I would always change it to, “I am stuck in a poetry reading with beautiful boys who are anonymous/ which is typical/ of getting your MFA in New York.” Meaning let’s leave the academic poetry reading and go back to each others' apartments where we can be the poetry reading.


Q: This sounds wonderful. Does the group have any historical precedents?

A: Absolutely. While I was studying at Sarah Lawrence I always fantasized about starting a group like Edmund White’s The Violet Quill. I thought of him and Andrew Holleran getting together with all the other gay fiction writers in the early 80s in New York, you know after Stonewall and as AIDS was just beginning. Just the idea of that kind of artistic community gave me life. And I thought, why can’t gay poets do that?

Of course they have done it—the Pink Poets in the 1990s, which I believe Alfred Corn started. I remember David Groff telling me about them and encouraging me in my hope to start something similar. In addition to all my peers, there were so many gay poets in New York who I read and admired—Mark Doty, Mark Bibbins, Richard Howard, it’s an endless list. So I thought, we live in the same city, we love poetry, we love men—why not get together? Tom Healy has been incredibly generous in hosting the salon at his apartment many times. We’re having our first Wilde Boys reading with Mark Doty on February 8 at the Cornelia St. Café in the West Village. And Bibbins has been coming to the salon from the beginning. I’ve invited Richard, and I think he finds the idea very charming, but he hasn’t been able to come yet. I think he will. We all adore him. We’d love to listen to anything he had to say.

Q: When I was an undergraduate at the University of Illinois Urbana Champaign, I went to kiss ins so someone would finally kiss me. It never happened. Could you talk about aesthetic beauty and politics? And how these come into play in your salon and what you discuss—how you even go about discussing it?

A: Beauty, like art, is political. No way of getting around that—and why would you want to? Our discussions are charged with everything from how we choose to express our sexual identities on the page and in our lives, to whether or not the imagination is bound to identity—if we can push past it, if that’s a good thing, or even possible. To be clear, I don’t think the imagination is bound to anything. I think it’s as real, perhaps more real than reality.

Q: One of the things that sounds great is that the salon is a reason for gay men to get together and truly talk. In something other than a coming out group. Not that I’m against those sorts of things. Can you talk about the long-term goals for Wilde Boys? How it moves beyond the academic? How it impacts the community at large?

A: I think it’s interesting that you ask about how Wilde Boys has the potential to move beyond the academic, especially since poetry is thought of as a very academic art form. I love what Louise Bourgeois says about the academic practice of art history in relation to her own artistic practice. "I am not interested in art history, in the academies of styles, a succession of fads. Art is not about art. Art is about life.”

This is why the idea of a salon appeals to me more than say a workshop, or being stuck within the bureaucratic confines of what academia interprets to be an artistic community today. It’s no question that the institutionalization of the MFA has changed the arts, and poetry. I suppose it’s cliché (or impossible), but I love the bohemian idea of the poet. I want to try and recreate that with Wilde Boys. To feel that you can write a poem and walk down the street and read your poem to your friend, who’s also writing a poem, and then invite all your other artist friends and talk about how ridiculous life is. To exist in the gap between art and life, like Robert Rauschenberg did.

Q: How do you feel straight people are responding to Wilde Boys? I saw that the amazing Patricia Smith was wonderful in asking how she could support you, thinking that maybe there was a zine you were all putting out.

A: To be honest, anyone who is queer friendly and dazzling is invited to come to Wilde Boys. And a lot of poets and people in the community have taken interest in how they can support us, or have asked to attend a salon out of curiosity. And I think that’s great—I wouldn’t say no to anyone. Also, wouldn’t it be fantastic if a painter came to one of the salons—and now I’m starting to fantasize about the Cedar Tavern in the 1950s where painters like Rothko and de Kooning, but also poets like O’Hara and later Ginsberg, came together. We can do that today. Why not? As O’Hara says, “everything continues to be possible.” This is New York.
[The first photograph above: David Wojnarowicz, Arthur Rimbaud in New York, 1978-9]
Posted by Steve Fellner at 2:52 AM