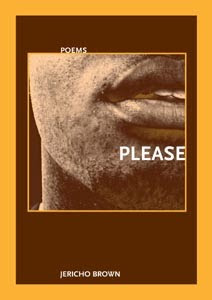 One of the exciting things about being a critic is when you find a poem that you’re enthusiastic about by a writer you had previously dismissed.

This is what recently happened to me with gay poet Jericho Brown.

Without qualification, I can say that I thought his book Please was one of the most over-hyped books the year it was released. I admittedly had nothing more than a tepid response to what I felt were its fairly ingratiating representations of bad sex and domestic abuse. The book’s organization of the extended conceit of a recorder seemed mannered, much in the same way as Louise Gluck’s Wild Iris, which brought her to fame. With Brown, you have the recorder (poet) playing songs (poems); with Gluck, you have the gardener (poet) planting flowers (poems). People seem to like books that flaunt their cleverness in guiding them through easy metaphors, and their obvious transitions, and definite circular natures. Brown does it through his musical allusions and self-consciously labeled and organized sections reflecting that of an album.

People got really angry by what I wrote, and I wasn’t exactly sure why the defenses were so stern and automatic, especially since I had said some equally unfavorable things about other poets.

But I shook it off, and tried to read the book again—maybe I had missed something. I did, and still couldn’t find anything that really engaged me. The poems seemed at best fine.

Now much time has lapsed. In a recent period of boredom, I found myself surfing the web for a gay poem that I could focus on. I came across a poem entitled “Contrast” that appeared on Verse Daily. It first appeared in Copper Nickel. I almost ignored the poem because its title is at best forgettable.

But the first three couplets intrigued me:

I want to relax, but it’s April.
My students cross and un-

Combined with the metonymy of the legs, the line breaks amplify the actual physical motion of the bodily restlessness. The raw sexuality submerges and emerges itself in a fun lurid way. And then it allows itself to transform itself into something larger with fierce lyricism. Here’s the rest of the poem:

Battling the next, all erect
Enough to win. I live with

disease instead of a lover.
We take turns doing bad things

To my body. We share a house
But do not speak. Both eat

What I feed. Spring is a leg
And can’t be covered. One day,

I was born. That was long ago.

This admirably compressed lyric manages to revitalize pretty familiar tropes: the seasons, suppressed sexuality, rebirth through its sardonic sense of humor: referring to spring “as a leg,” the welcome nastiness of “doing bad things/To my body,” nature’s erectness not necessarily achieving its full virility, but it being enough “to win.”

And the final two lines are near perfect. The penultimate line takes on two different charged meaning depending on how you read it. You almost (and I do) want to insert what could be seen as an implicit “for” between the beginning and ending fragments so that it “And cant be covered for a day”—claiming that nature, sexuality can’t be repressed. This reading accentuates the final line as more of an unreserved declaration, a claim devoid of longing.

This offers a bold ambiguity in its closure: is the birth being longed for or is it being boldly rejected? And if one is to read this as an AIDS poem, one cannot help but applaud the poem for managing to offer these two seemingly contradictory feelings. It subverts the idea of AIDS as simple disease, and perhaps, even of an empowerment, a defiant rejection of the sentimentality of rebirth.

It’s funny, when I read this poem to a friend, he asked me if it changed my opinion of his book. In keeping with the spirit of the poem, I told the truth: no. The past was not born anew; it was still the past. All I can say is I hope this is the future of Brown’s new work, because I like this present.

Jericho Brown's Please is available through New Issues Poetry & Prose or click on the book image (above) for more information.
Posted by Steve Fellner at 2:45 AM