I recently read a mass email that you sent out, saying that you extended the December 1 deadline for submissions to the annual Lambda Literary Awards.  You reported that you would be contacting publishers who you thought had worthy entries.  There are three poetry books that I feel need to be entered.  I am afraid that because they are chapbooks and not full-length that their publishers might feel reluctant to enter them.  Chapbooks are often marginalized and often unfortunately seen as merely a gateway to a full-length book.  I feel that they should be considered as a self-contained product.  That's why I believe Sibling Rivalry Press, Winged City Chapbooks c/o. New Sins Press, and Rocksaw Press should be contacted.  They each produced a fine chapbooks that I feel could easily become a finalist.  The three chapbooks include Saeed Jones' "When the Only Light is Fire," Aaron Smith's "Men in Groups," and Glenn Sheldon's "Biography of the Boy who Prays to the God of Foreheads."  Please don't marginalize chapbooks.  (If Frank Bidart's chapbook "Music Like Dirt" can be a finalist for the Pulitzer surely these chapbooks could be at the very least considered for a Lambda.)  Immediately below are my microreviews of these works. 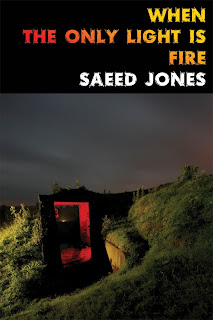 Much anticipated, Saeed Jones’ chapbook When the Only Light is Fire lives up largely to its hype, particularly the first half.  Stand-outs include the personae poem “Kudzu” (“And if I ever strangled sparrows/it was only because I dreamed/ of better songs”) and “Boy Stolen Evening Gown” (“I waltz in an acre of bad wigs.”)  His deftly compressed series of poems about the murder of James Byrd, Jr. act as an affirmation and a successful extension of Lucille Clifton’s famous work, “jasper texas 1998”  Who could forget her line: “I am a man’s head hunched in the road./I was chosen to speak by the members/of my body.”?  Here on his own terms, Jones writes with a similar defiance in “Jasper, 1998: I”: ...”but I speak/(tongue slick with iron)/but I speak/in the language of sharp turns.”   His very few less successful poems deal with bad sex, jilted lovers, dark lonely nights.    There, he ditches his technique, strong line breaks, sharp turns of phrase, for baroque setting.  Take the poem “Room 31”: “Cigarette smoke/is the smell of the last couple here,/the ghost of their stains/still/on the sheet,..”  More of a sign of youth than anything I bet, these minimal, disposable scenes will be replaced no doubt by more earned and honorable sadness.  Regardless, don’t miss out on this exciting debut.
Saeed Jones' When the Only Light is Fire is available through Sibling Rivalry Press.
*** 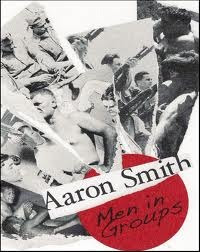 I was not a fan of Aaron Smith’s first book Blue on Blue Ground.  It felt canned and amateurish. (“There’s a different kind of loneliness/in the city, one of thousands of people rushing away/...and streets that at night are forbidden like desire.”)  Over the years, I’ve been reading his new work online, and have been awed by his transformation into one of our more accomplished comic poets.  One of my favorites is his inspired rewrite of  Berryman’s Dream Song 14, “Life, friends, is boring.”  Here’s an excerpt from the poem called “Open Letter”: “Your choice of socks is boring.  (So is the way you walk!)  You eat boring bagels with butter (not cream cheese) and your breath reeks with boring, boring coffee and morning stink.”  Not only here, but in a number of other places in the book, he proves himself to be the master of the parenthetic expression, using them to provide an odd, inspired sincerity.  The closure of the poem “Hurtful” reads: “...I hate you/more for: That you can eat French fries/and not exercise.That everyone you let/be close to you has to need/you.  Strangers gawking/because you’re radiant (and you are radiant!)”  By far, my favorite poem in the book is “Diesel Clothing Ad (Naked Man with Messenger Bag)” which is essentially an ekphrasis at heart: “So what if the woman’s hand reaching/for the bag pulls the bag/back and we see his dick,/that one ball hangs lower/than the other,that he shaves them.  So what.  So what..."  The poem continues to use stanza breaks, spacing, and anaphora to embody the motion of the bodies in the actual ad.  The only criticism I have is his unfortunate use of the second-person from time to time.  Smith is too gentle a poet to succeed in such a control move.  You can feel him overextending, which results in a cuteness and an unsuccessful sadistic gesture.  We don’t want to live out his occasionally frivolous clichés.  From his poem “Lucky,” Smith writes: “Who knew they’d punish you for knowing/your turquoise shirt went perfectly/with black sweatpants and turquoise/Chuck Taylors?”  All in all, Smith’s chapbook is full of some of the most inspired comedy of the year.
Aaron Smith's Men in Groups is available through Winged City Chapbooks co/New Sins Press. 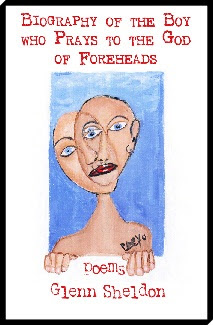 Admirably eerie, at times angry, and other times necessarily sentimental, Glenn Sheldon’s Biography of the Gods of Foreheads freaked me out in the best sense.  In this current, troubled moment of history, we often overlook the power of allegory.  Only a poet as skilled as Sheldon can triumph over ‘war-worn amnesiac bats.’   The book is divided into six sections, each one revealing more nuance to his inquiry into youth, artistic process, and an abstracted politics.  Unlike so many books of poetry, Sheldon refuses to write flat journalism.  The book feels influenced by someone like Jeanette Winterson, blending a sort of magic realism with unrestrained metaphor.  As Sheldon writes: “The boy’s attic shrinks into the space of this poem, still size of a room with green flourishes of jungle,/industry of generational anarchy./The pages are  chiseled...”  By the end, the boy finds himself: “Deeper into himself but flying higher, desired/as an image to be stained in glass, he occurs:/epiphany of currency and blood’s sexy blues.”  Sheldon’s words are never ‘too fast, too flung,’  His words and the ‘fantastically small spaces between them’ broke my heart-- and mended it, too.

Glenn Sheldon's Biography of the Boy who Prays to the God of Foreheads is available through RockSaw Press.
Posted by Steve Fellner at 6:10 PM