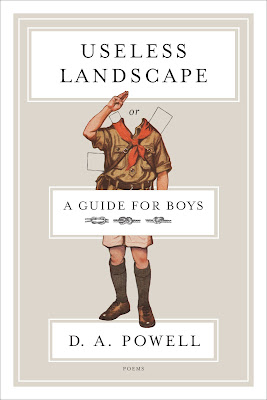 It's wonderful to see a comprehensive critique of a gay writer's poems done in such a thoughtful way.  Here's a passage from Stephen Burt's appraisal of D.A. Powell's new book, Useless Landscape, or A Guide for Boys:

Many GLBT poets (as we say now) write about sex; many seek not just libidinal celebration, not only attentive mimesis, but also ethical stances against prejudice and denial, disease and death. Even among those peers, though, Powell’s puns and his ironies, his command of genuinely elevated along with grinningly rueful tones, his refusal to simplify the life he depicts, and his sense of the shape of a line set him apart. Those attributes make his new writing, on sex but not just about sex, not only sad and funny and grotesque and dense and resonant, but itself often thrillingly, shockingly sexy.

The essay-review appears in its entirety on-line at Boston Review's website.
Posted by Steve Fellner at 8:33 PM