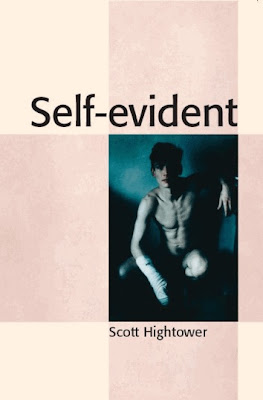 Always turning in clean work, Scott Hightower is someone who simultaneously is so present in the poetry scene and yet oddly almost underneath everyone's radar.  Hopefully, his new book "Self-evident" will change that.  It should.  It's always been unfortunate that several gay poets of the same generation have often been eclipsed by their peer, the ubiquitous Mark Doty.  I think that both Hightower and Doty (who is the older by a year) often share a similar temperament --a formidable strength sometimes-- and only sometimes-- accompanied by a piercing aggressiveness.  Although Doty could reasonably be said to have a finer ear, I think that it's his choice to write personal narratives that has ultimately won him much more acclaim.  Which is upsetting.   Hightower's consistent personae poems can be as deftly crafted and as personal, maybe even more so.

One of my favorite poems,  "Le Soldat Avec Les Besoins Infantiles," is largely an acute dramatic monologue in the voice of the female fairy addressed in Keats's "La Belle Dame Sans Merci."  It could almost be read as a not-too subtle critique of Hightower's choice of the dramatic monologue as a genre.  At the same time, Hightower doesn't self-deprecate to the point of a pure unnecessary dismissal.  This sort of balanced self-reflexivity embedded in the structure of the poem makes it even smarter.  Here's an excerpt:

...Afterwards, I knew
he would resort to grumbling
from some perverse shadow

of his own masochistic imagination,
that there would be a dramatic
monologue about being abandoned.

Would that he grasped that each
of us does well but to serve up
to the other the most ordinary joy!

The whole undulating world
is complete and florid,
is a single rhapsodic

motion.  And, as you
and I will know--his
own gorgeous, archaic

whiny self-indulgence
included--everywhere, there
are sweet songs worth singing....


Like Richard Howard, a good number of Hightower's poems are historical in nature.  His range is more than comprehensive.  You have no idea who he's going to choose as the next subject for a poem.  In this books, he includes filmmaker Sergei Parajanov, photographer F. Holland Day, Nobel prize-winning scientist Severo Ochoa, Casanova, and Benjamin Franklin.  And that just scratches the surface.  Ekphrastic poems also help fill the collection.

Some of my favorite poems include "Madrid, Please, Take Me; Be Mine" ("You are my Castilian/My Euskera, my Bable,/ My Pig Latin.); "There are Lecagies Beyond Land" (...I came to your granaries/ and lanes a bride, with only the dowry of poetry/ my sophistication green."); "Identity Redux" ("The wingless moon floats/beyond the encapsulating/spotlight, and each one/in the theatre must find/each's own way home."

You can feel the intellectual rigor in Hightower's interplay with high culture and history.  This initially made me standoffish-- which may be an issue of class.  Having parents who never went to college, I've perhaps always prematurely rejected poems that seem to be pushing a certain sort of academic elitism.  This is often what I see as an overdetermined desire upon the part of gay poets to prove one's own work as legitimate through incorporating a lot of history and high-cultural allusions.  Why do we need to be so well-rehearsed about the literary canon?   Let's choose our own metaphors.

But, of course, this isn't a fair critique--there's a multiple number of ways political resistance and poetic novelty can be created.  Hightower reminds us of that. And one of the things that's particularly clear about Hightower's books is that while he engages with such high-culture topics, he critiques this privilege --that's something that sets him apart.  In his smartly titled "Lately, Opening the Refrigerator" he glosses a few of the people who've died from AIDS, and then jump-cuts to sitting in the Presidential box of the Prague opera house.  He offers an appraisal ("The opera-which has never before/really quite worked for me...") and then ends describing the mise-en-scene:

...opens and closes in a garret,
two despairing choruses:
a group of grieving women,

a line of men lending
support to one another,

these broken things
of this world, this shelter.

The brilliant use of the word "shelter" and his placement of it on the final line is a small example of why Hightower is such an expert poet.  In his own poems, he takes refuge in personae and history; at the same time, openly reveling in what personal truths may come from that.  And offers those truths for-- at least for a moment-- what other, lesser poets may see as merely autobiographical "broken things."

You can receive more information about Scott Hightower's Self-evident at Barrow Street.
Posted by Steve Fellner at 10:04 PM